I must acknowledge the book  From Swampland to Farmland: a history of the Koo Wee Rup Flood Protection District by David Roberts. (Published by Rural Water Commission in 1985) in preparation of this history.

The Koo Wee Rup Swamp originally covered about 96, 000 acres (40,000 hectares) is part of the Western Port sunkland. Very non-scientifically, the land sunk thousands of years ago between the Heath Hill fault and the Tyabb fault, and the streams that originally drained straight to the sea, such as the Cardinia, Toomuc, Deep Creek, Ararat, Bunyip and Lang Lang now descended onto the flat sections of the sunkland, flowed out over the land and created the swamp conditions.

Small scale drainage projects on the Swamp began as early as 1857 when William Lyall (1821 - 1888) began draining parts of the Yallock Station to drain the excess water from the Yallock Creek. In 1867, Lyall and Archibald McMillan, owner of Caldermeade, funded a drain through the Tobin Yallock Swamp and created a drain to give the Lang Lang River a direct outlet to the sea. Lyall also created drainage around Harewood house (on the South Gippsland Highway Koo Wee Rup and Tooradin).

In 1875, landowners including Duncan MacGregor (1835 - 1916), who owned Dalmore, a property of over 3,800 acres (1,500 hectares) formed the Koo Wee Rup Swamp Drainage Committee. From 1876 this Committee employed over 100 men and created drains that would carry the water from the Cardinia and Toomuc Creeks to Western Port Bay at Moody’s Inlet. The Cardinia Creek outlet was eight metres at the surface, six metres at the base and 1.2 metres deep, so no mean feat as it was all done manually. You can still see these drains when you travel on Manks Road, between Lea Road and Rices Road - the five bridges you cross span the Cardinia and Toomuc Creek canals (plus a few catch drains)

It soon became apparent that drainage works needed to be carried out on a large scale if the Swamp was to be drained and landowners protected from floods. The construction of the Railways also provided a push to drain the Swamp. The Gippsland railway line, which straddled the northern part of the Swamp, was completed from Melbourne to Sale in 1879. The construction of the Great Southern Railway line through the Swamp and South Gippsland, to Port Albert, began in 1887. These lines, plus a general demand for farm land bought the Government into the picture.

The Chief Engineer of the Public Works Department, William Thwaites (1853 - 1907) is almost forgotten in Swamp history, and should get more credit than he does. Thwaites surveyed the Swamp in 1887 and his report recommended the construction of the Bunyip Main Drain from where it entered the Swamp, in the north, to Western Port Bay and a number of smaller side drains. 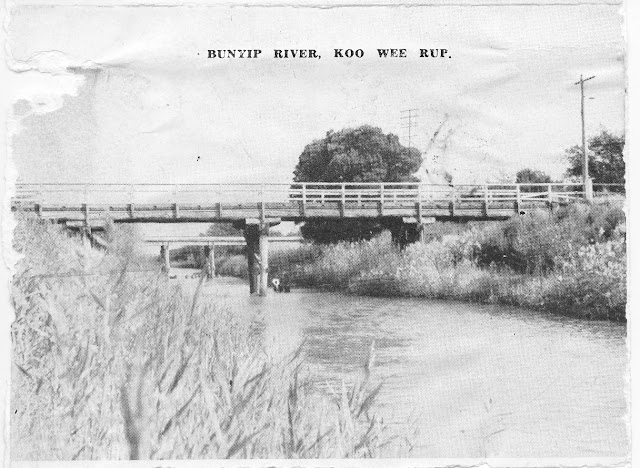 This is the Main Drain (Bunyip River) - a 1940s postcard. That would be the road bridge at the front and the rail bridge at the back

There was a scientific background to this scheme - Lewis Ronald East, engineer with  and later Chairman of  the State Rivers and Water Supply Commission (SRWSC) , published a paper called Swamp Reclamation in Victoria in 1935. East writes that the drainage plan was based on the formula Q=CM3/4 - where Q was the discharge in cusecs, C a coefficient and M the area of the area of the catchment in square miles. 50 was adopted as the value of C for ordinary floods and 100 for extraordinary floods. The Scheme was worked out in detail to deal with ordinary floods, but for some unaccountable reason - possibly shortage of funds - it was recommended that the drains be constructed in the first instance to only 1/3 of the designed dimensions, but the reserves were to be of sufficient width to allow future enlargement. East says that the intention of the “Swamp Board” was to merely facilitate the removal flood waters and thus permit the use of land between floods.

A tender for works was advertised in 1889. In spite of strikes, floods and bad weather by March, 1893, the private contractors had constructed the 16 miles of the drain from the Bay to the south of Bunyip and the Public Works Department considered the Swamp was now dry enough for settlement. At one time over 500 men were employed and all the work was done by hand, using axes, shovels, mattocks and wheel barrows.

In spite of what seemed to be good progress - the Public Works Department had been unhappy with the rate of progress and took over its completion in 1893 and appointed our friend, Carlo Catani.

The 1890s was a time of economic depression in Australia and various Government Schemes were implemented to provide employment and to stop the drift of the unemployed to the city. One of these schemes was the Village Settlement Scheme. The aim was for the settlers to find employment outside the city and to boost their income from the sale of produce from their farms. It was in this context that Catani implemented the Village Settlement Scheme on the swamp. Under this Scheme, all workers had to be married, accept a 20 acre (8 hectares) block and spend a fortnight working on the drains for wages and a fortnight improving their block and maintaining adjoining drains. The villages were Koo Wee Rup, Five Mile, Cora Lynn, Vervale, Iona and Yallock.

Many of the settlers were unused to farming and hard physical labour, others were deterred by floods and ironically a drought that caused a bushfire, however many stayed and communities developed. My great grandfather, James Rouse, a widower, arrived on the Swamp with his nine year old son Joe, in 1903. James, who had been a market gardener in England, was part of a second wave of settlers who were granted land as they had previous farming experience.  By 1904, over 2,000 people including 1,400 children lived on the Swamp. By the 1920s, the area was producing one quarter of Victorian potatoes and was also a major producer of dairy products. In fact, as we know, Koo Wee Rup remains an important potato growing area and the importance of the potato was celebrated by the Annual Potato Festival during the 1970s and 1980s. Today, 93% of all Australian asparagus is produced on the Koo Wee Rup Swamp.

The existing drainage works that we see on the Swamp today are really the result of a reaction to various floods. As East wrote in 1935 it was soon evident that the drainage provision made was quite inadequate.  There was a flood in 1893 and according to East the drains were enlarged by at least 50% in 1895 and then enlarged again in 1902, the catalyst being the 1901 flood.  The 1902 work had the objective to remove all floodwaters from a maximum flood within three days

There were some additional drains created in 1911 and by 1912 East says that the drainage scheme had cost £234,000 and the Government had recouped only £188,000. There were arguments over who should fund the scheme - many land owners were opposed to being charged for any work and it was not until after more floods in 1916 and 1917 they agreed in principle to an annual flood protection charge and the ‘Lower Koo Wee Rup flood protection district’ came into being.

The State Rivers scheme provided for substantial remodelling and enlargement of existing drains, new channels and additional drains next to the Main Drain to take the water from the converging side drains. Other work carried out at this time included giving the Lang Lang River a straight channel to the bay and at the western end of Swamp tapping the Deep Creek into the Toomuc Drain created in 1876.

Before I go on to the devastating 1934 flood I am going to tell you about the LubeckerSteam dredge. Apparently Catani was interested in using machines on the Swamp in the 1890, but as this was a time of depression the Public Works Department felt that this would take away jobs so it wasn’t until 1913 that Catani could import his first dredge. It was the Lubecker Bucket Dredge, costing £4,716 which arrived in 1913 and started work on the Lang Lang River. When it finished there in 1916 it started on the Koo Wee Rup Swamp on the Main Drain, Cardinia Creek and the Yallock Drain. It weighed 80 tons and had a capacity of 61 cubic metres per hour. A labourer at the time dug about 8 cubic metres per day. It had nearly completed its useful life in 1935 when East wrote his report. 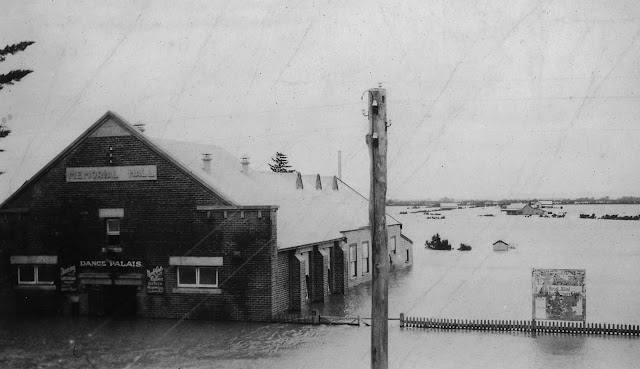 None of the existing works could prepare the swamp for the 1934 flood. In October of that year, Koo Wee Rup received over twice its average rain fall. November also had well above average rainfall and heavy rain fell on December 1 across the State. This rainfall caused a flood of over 100,000 megalitres or 40,000 cusecs (cubic feet per second) per day. This was only an estimate because all the gauges were washed away. The entire Swamp was inundated; water was over 6 feet (2 metres) deep in the town of Koo Wee Rup, exacerbated by the fact that the railway embankment held the water in the town; my grandparents house at Cora Lynn had 3½ feet of water through it and according to family legend they spent three days in the roof with a nine, five, three year old and my father who was one at the time. Over a thousand people were left homeless. This flood also affected other parts of the State, including Melbourne.

As a result of the 1934 flood, the SRWC worked on new drainage plans for the Swamp and these plans became known as the Lupson Report after the complier, E.J Lupson, an Engineer. A Royal Commission was also established in 1936. Its role was to investigate the operation of the SRWSC. The Royal Commission report was critical of the SRWSC’s operation in the Koo Wee Rup Flood Protection District in a number of areas.  It ordered that new plans for drainage improvements needed to be established and presented to an independent authority. Mr E. G Richie was appointed as the independent authority. The Richie Report essentially considered that the Lupson Report was ‘sound and well considered’ and should be implemented. Work had just begun on these recommendations when the 1937 flood hit the area. The 1937 flood hit Koo Wee Rup on October 18  and water was two feet (60cm) deep in Rossiter Road and Station Street. The flood peaked at 20,000 cusecs (50,000 megalitres) about half the 1934 flood volume.

There is on-going work on the Main Drain all the time - recreation of levee banks, removal of vegetation etc but the opening of the spillway was basically the last major engineering works to happen on the Swamp.

Today we look at Swamps as wetlands, worthy of preservation, but we need to look at the drainage of the Swamp in the context of the times. Koo Wee Rup was only one of many swamps drained around this time; others include the Carrum Swamp and the Moe Swamp. To the people at the time the drainage works were an example of Victorian engineering skills and turned what was perceived as useless land into productive land and removed a barrier to the development of other areas in Gippsland. 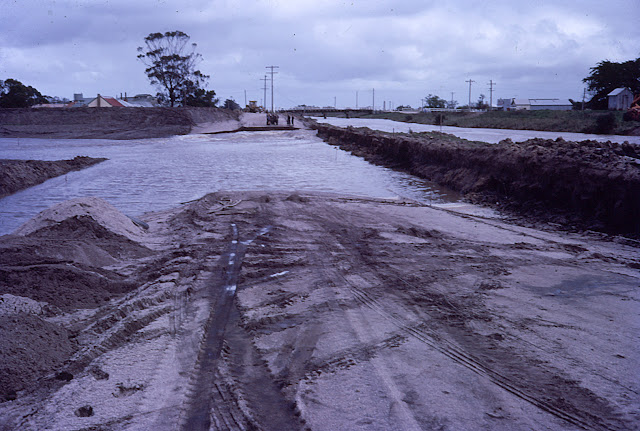 Construction of the Spillway at Cora Lynn, October 1962 - the Main Drain is on the right, separated by a soon to be removed levee bank from the spillway which is ironically underwater, due to a flood. Photo: Rouse family collection

Heather
I am the Local History Librarian at a Public Library Service in the south-east suburbs of Melbourne. I am also the President of the Koo Wee Rup Swamp Historical Society, the secretary of the South Eastern Historical Association and the Trafalgar Truck Restorers Club.